Roanoke protest ends not long after firework thrown at officers

ROANOKE, Va. – Police have released the name of the woman hit by two cars in Roanoke Wednesday night.

Charles Henderson said he would spend a lot of time with Tameshia Leftwich-Davis as close friends.

Henderson said it was a very busy scene after the accident with more than 50 people standing around trying to figure out who was involved in the accident. He was able to find out it was his friend by the clothes she was wearing.

Strips of crime tape remained at the scene Thursday afternoon.

Henderson said he was a close friend of Leftwich-Davis' who saw her walking the same street earlier in the day.

"I'm very saddened by it. I was hoping it wasn't her. But it was her," said Henderson.

Orange Avenue and 14th Street were blocked for hours after police said she stepped in the road and was hit by a van, causing her to go into the westbound traffic lanes, where she was hit by another car. Henderson remembers what he saw after the accident.

"All of the sudden, I saw all these fire trucks and ambulances coming by. I figured something happened. She was pinned under the car," said Henderson.

His friend, who he said lived in the area, died at the scene. After losing his friend, Charles Henderson has a word of advice to others.

According to police both drivers involved stopped at the scene. The accident is still an active investigation.

This latest accident prompted us to find out how many pedestrians have died as a result of getting hit by a car in the Commonwealth.

Documented by the Virginia Department of Motor Vehicles, the city of Roanoke has one fatality this year but if a crash is still under investigation, those numbers won't be included until the case is clear.

Brandy Brubaker, public relations and media liaison for the Virginia DMV said as of the end of May, 35 people had died as a result of getting hit by a car. The Department of Motor Vehicles said in 2016 there were 42 pedestrian fatalities at the same time last year, which is higher by 5 percent.

Overall, more than 120 people died last year across the Commonwealth.

The Virginia DMV is looking into why there was an increase in fatalities from 2015 at a total of 78. The traffic safety officer with Roanoke police said her job is to investigate crashes. Officer Fatima Foster said sometimes they can be prevented.

"Slow down to a speed that will allow you to have enough reaction time if something jumps out at you. Also, as drivers are going through neighborhoods, be mindful that people may stand in between parked cars. And by the time you see them, they're already in the road and it may be too late, and that goes for pedestrians as well," said Foster.

Here's a breakdown of the local numbers from the DMV: In 2016 Bedford County had one pedestrian death involving a motor vehicle. In Danville, there were three;  in Pittsylvania County, two; and in the city of Roanoke, there were four.

The table below breaks down crashes, pedestrian fatalities and pedestrian injuries for 2016 and 2017. Click the table to view it full-screen. 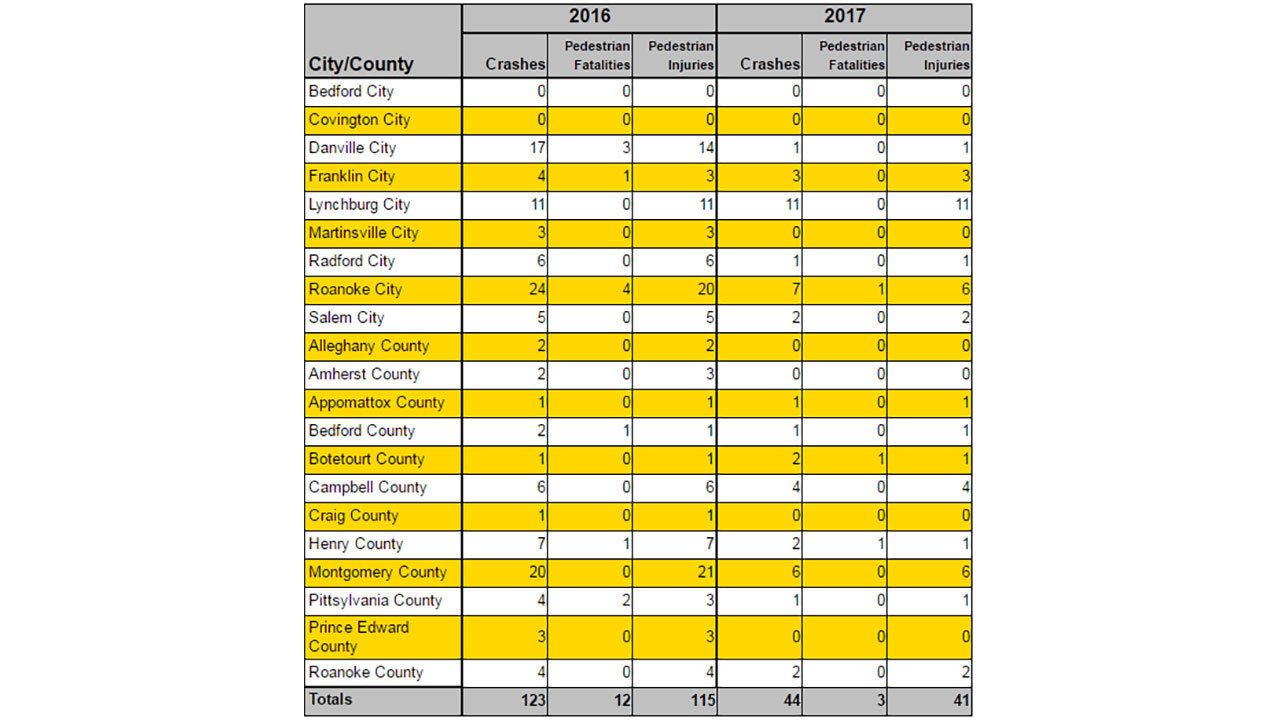 Brandy Brubaker with Virginia DMV provided WSLS 10 with this chart.