‘This is the time for us to be gracious’: Liberty alum’s Facebook post following Falwell’s leave of absence spreads quickly

Does a hot and dry May mean a brutal summer?

This has been the hottest May on record so far in the Star City.

ROANOKE, Va – After two straight days with record-breaking heat in Roanoke, May is now the hottest on record (so far) in the Star City. We still have eighteen days to go, and things "cool down" a little this week.

In fact, temperatures have reached 90 degrees four times already in Roanoke. That's tied with 1977 for the 3rd most on record in the month of May. We've only reached that mark once in Lynchburg and twice in Danville.

Still the question becomes, "Is this summer going to be especially hot?"

That's a tricky question to answer. For that, I tried to find correlation from three factors.

1. I looked for a correlation between hot and dry Mays and the following summers, and didn't find any strong correlation.

2. Typically, the drier it is in the spring and summer - the warmer things are. That's part of why this May has been the hottest on record so far. I tried to factor precipitation into my little bit of research as well.

3. I also tried to link ocean circulations in the eastern Pacific, as that can oftentimes alter the overall weather pattern.

Based off of that, let me show you some of the data I've obtained over the weekend, by splitting it up into Q and A format.

Q: Out of the hottest 15 summers, when was the first 90-degree day? Also, how dry was it that spring?

I ask this question, because we hit 90 degrees very early in Roanoke this year. It's also been a rather dry spring for most of the area. Only 4 of the 15 hottest summers in Roanoke came after a dry spring and early 90 degree occurrence.

Q: We hit 90 degrees for the first time this year on May 3rd. In years when we hit 90 before that date, what were the summers like?

When the first 90-degree day came before May 3rd, 12 of the following 17 summers wound up being warmer than average. 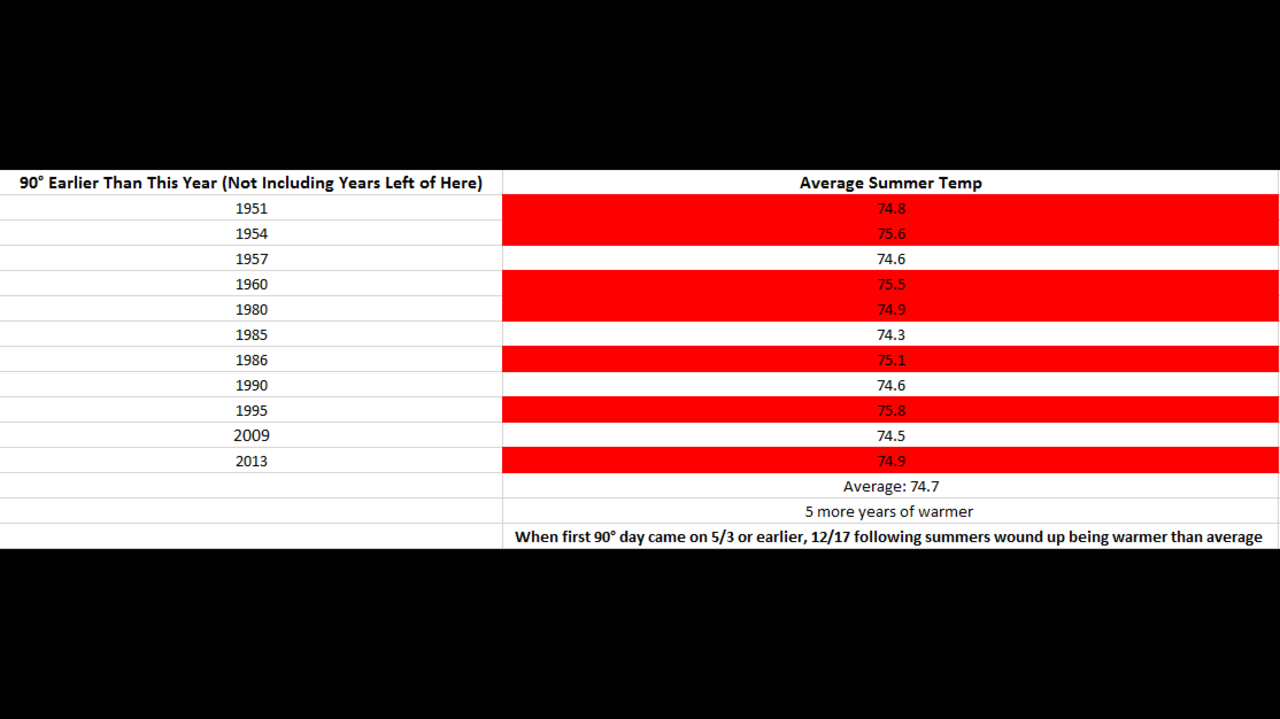 Q: When we hit 90 degrees 3 or more times in the month of May, what was the following summer like? 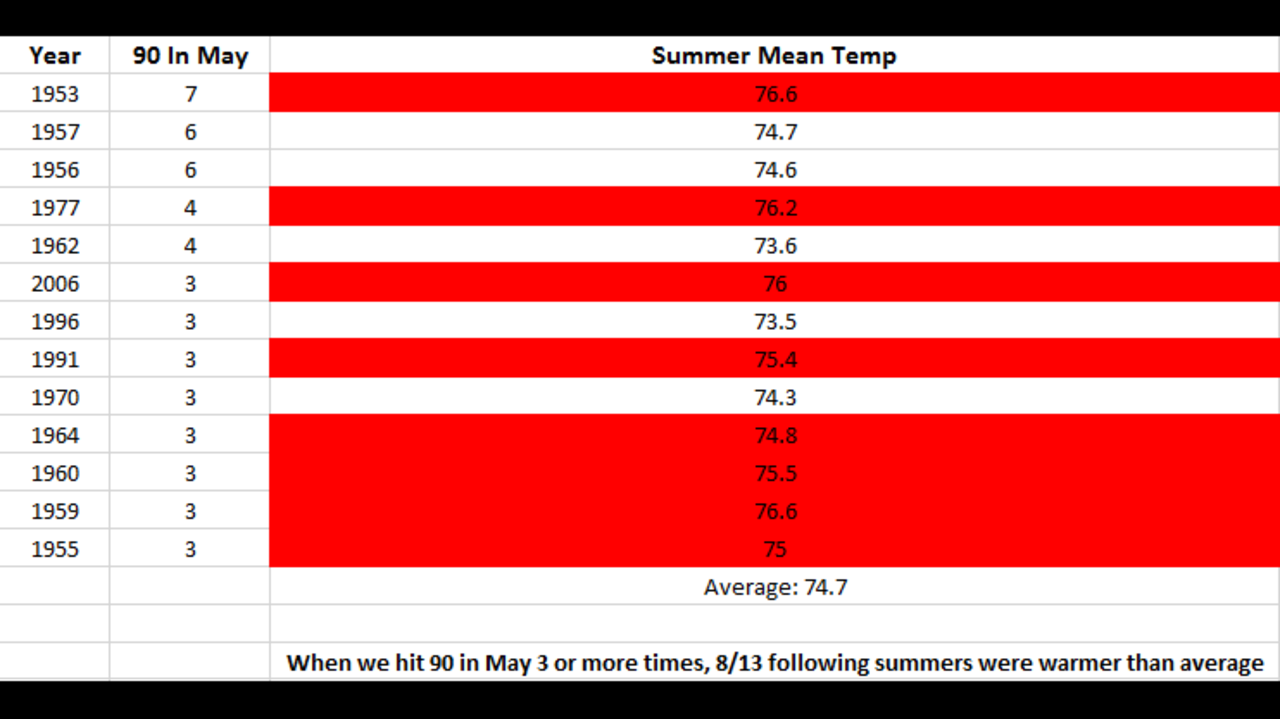 Q: Looking at the hottest 15 Mays on record, how many summers then went on to be warmer?

Only nine of the following 15 summers went on to be warmer than average. I tried to look at ocean temperatures in the eastern Pacific (El Niño and La Niña) to see if this had any impact. From this research, the impact seems fairly negligible. 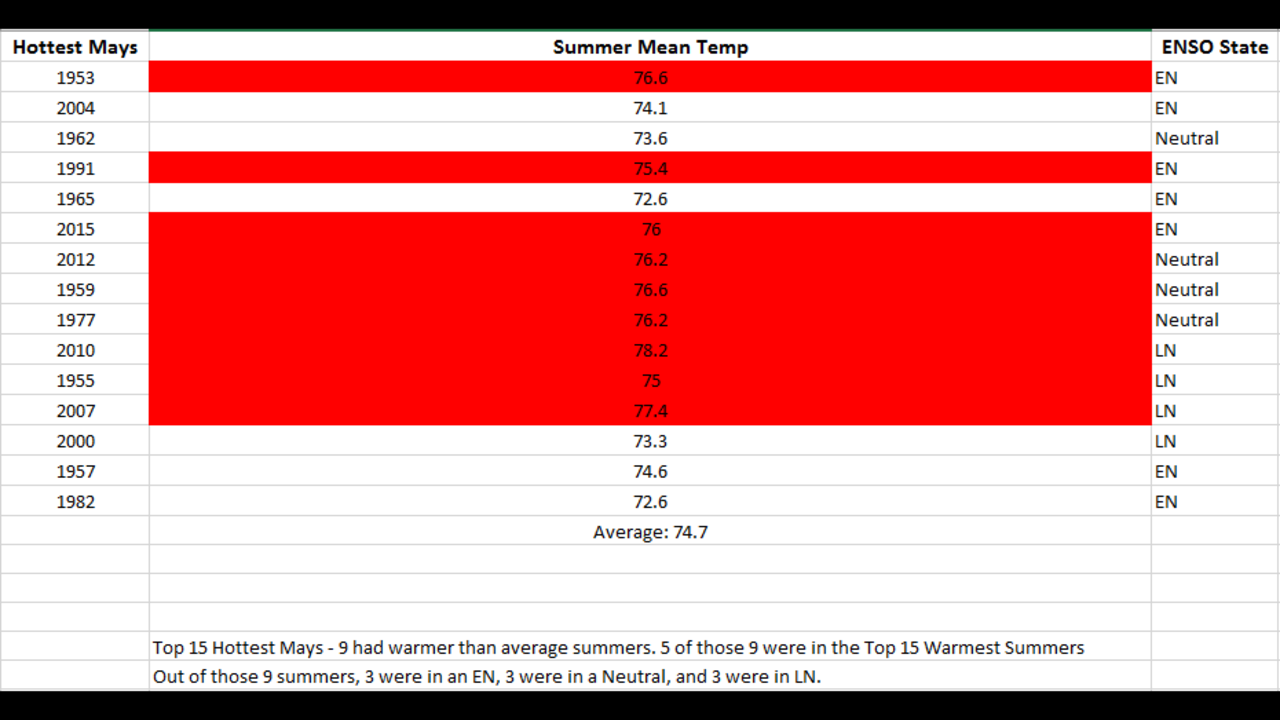 Q: Looking at the driest 15 Mays on record, how many summers then went on to be warmer?

After the 15 driest Mays on record, only 7 of the following summers went on to be warmer than average. 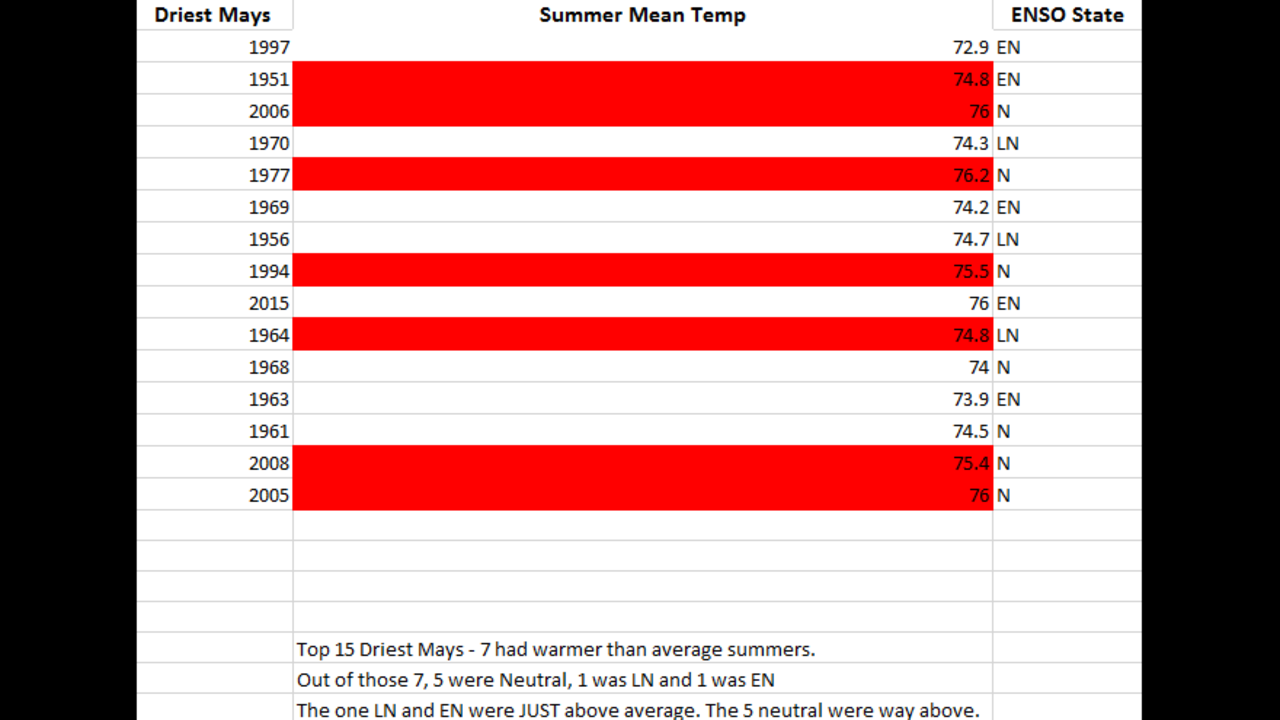 As you can see, there were a lot of questions that I felt I needed to ask. Solely based off this research, I don't have a concrete answer as to what this summer will be like for us.

I can tell you that if the dry pattern continues, then we're in for an especially hot summer. More moisture in the atmosphere and in the ground prevents the temperature from spiking like it has in the last two weeks. Less moisture allows that spike to happen more frequently.

That's obviously something we'll have to watch.

In the meantime, our forecast for the week ahead shows the heat continuing through Tuesday and then mellowing out from Wednesday onward.