‘We’re doing what we can to survive’: Bent Mountain Bistro adapting to coronavirus regulations

After huge storms like Florence, Michael, hurricane season comes to an end.

This falls right in line with what NOAA forecast before the season even started.

In late May, Alberto made landfall as a (sub)tropical storm near Laguna Beach, FL. This wound up just being a small dent compared to what would come roughly five months later.

Fast forward to September, when Florence set its sights on the East Coast. Upon making landfall, rain was measured in feet in parts of North and South Carolina. Elizabethtown, NC came away with roughly three feet of rain - an all-time record amount of rain due to a tropical system in the Tar Heel State.

At one point, Florence was moving slower than your average human being! This slow-moving storm, while weakened, sent multiple inches of rain into our area, resulting in flooding, mudslides and road closures.

Just to the east, Florence's last gasp was enough to cause a tornado outbreak near Richmond.

Shortly after that, all eyes were on Michael. Michael started as a tropical wave near the Yucatan Peninsula, but it would blossom into a monstrous storm once it moved into the Gulf's warm waters.

One mile per hour away from being a Category 5 storm, Michael decimated Mexico Beach, FL, turning it from paradise to a war zone.

Once Michael raced up the East Coast, it wound up putting parts of Roanoke and Southside under water. The Dan River at Danville reached record flood stage, while the Roanoke River rose to its 7th highest level on record.

It's because of storms like Michael and Florence that four localities in our area have already broken their yearly rainfall records. Those are Bedford, Rocky Mount, Martinsville and Pulaski.

We studied 16 other localities to see just how close they've come to record rainfall. Here is what we found. 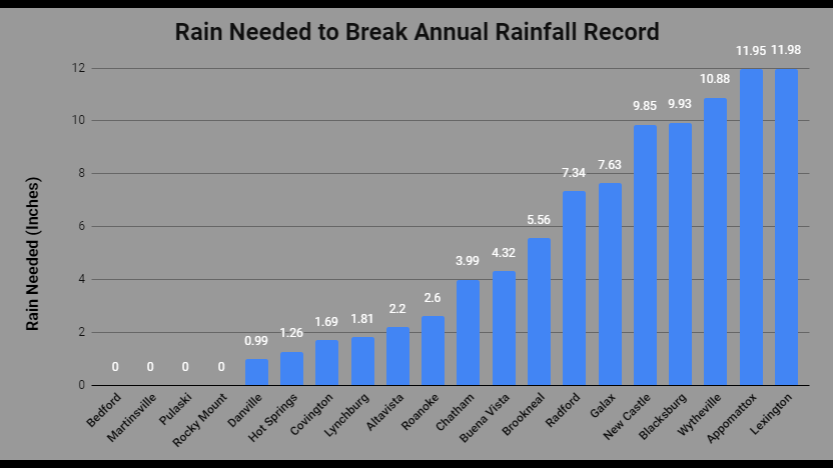 Places like Danville, Hot Springs, Covington, Lynchburg, Altavista Roanoke, and could certainly wind up breaking their yearly rain records in the next month.

This would be more difficult to achieve in places like Galax, Radford, New Castle, Blacksburg, Wytheville, Appomattox and Lexington.