AEP donates more than $10,000 from recycling to Ronald McDonald House

With these simple tricks, you'll master the 'Buzz Lightyear' attraction at Disney in no time

Ready to be a Galactic Hero? A perfect 999,999 is just a couple hacks away

Any Disney World regulars out there? Or what about "Toy Story" fans who love "Buzz Lightyear's Space Ranger Spin?"

This attraction, which sits in Tomorrowland at the Magic Kingdom, lets riders fire a laser to earn points and defeat the Evil Emperor Zurg while journeying through a galactic space battle. The ultimate goal is becoming a Galactic Hero. Of course, you'd know all this already if you really are a Disney regular. But now that we're all on the same page, let's dive in!

Becoming a Galactic Hero can take years of hard work and practice for most space cadets.

However, with a couple of simple tricks, you can walk out of "Buzz Lightyear's Space Ranger Spin" a Galactic Hero within a matter of minutes.

WARNING: This article contains spoilers/cheats for “Buzz Lightyear’s Space Ranger Spin.” If you enjoy the game and want the tricks to remain a secret, go read one of these articles instead: 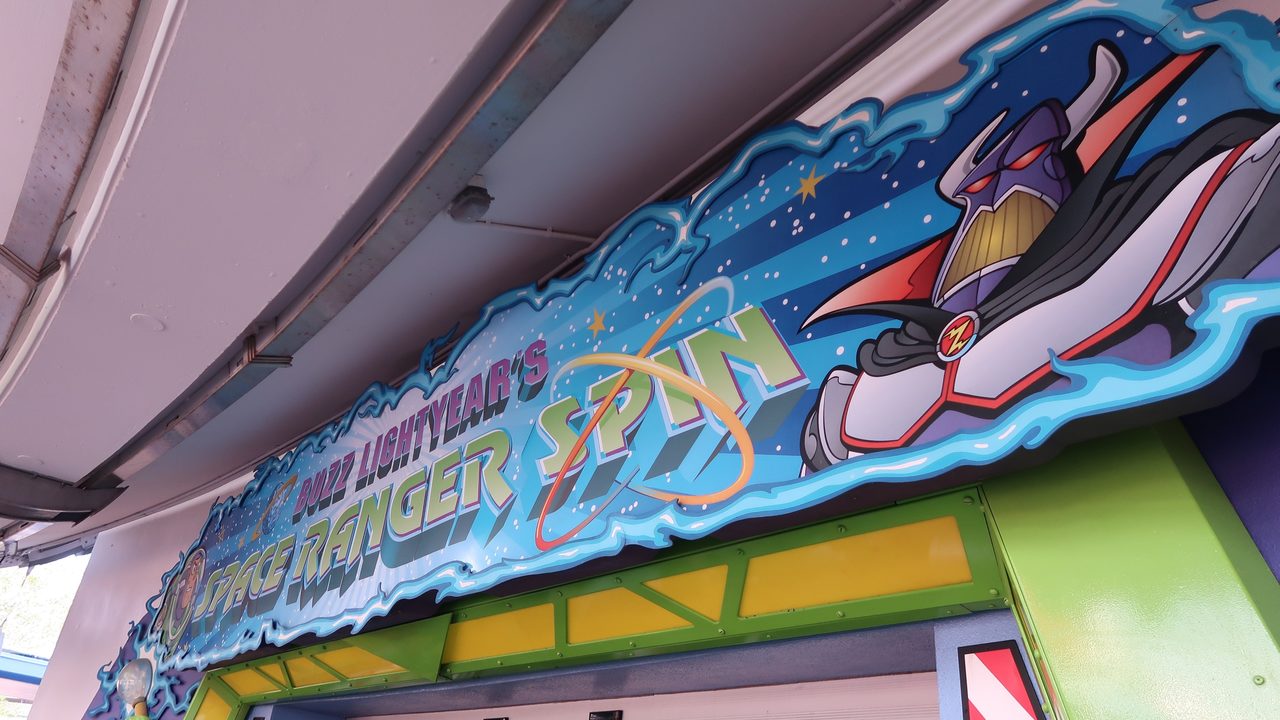 In order to help, you will climb aboard your XP-37 star cruiser and journey deep into the Gamma Quadrant, where you will take aim and blast glowing “Z” targets with your personal laser canon.

During your adventure, use your cruiser’s joystick to spin 360 degrees, allowing you to hit targets anywhere in sight. 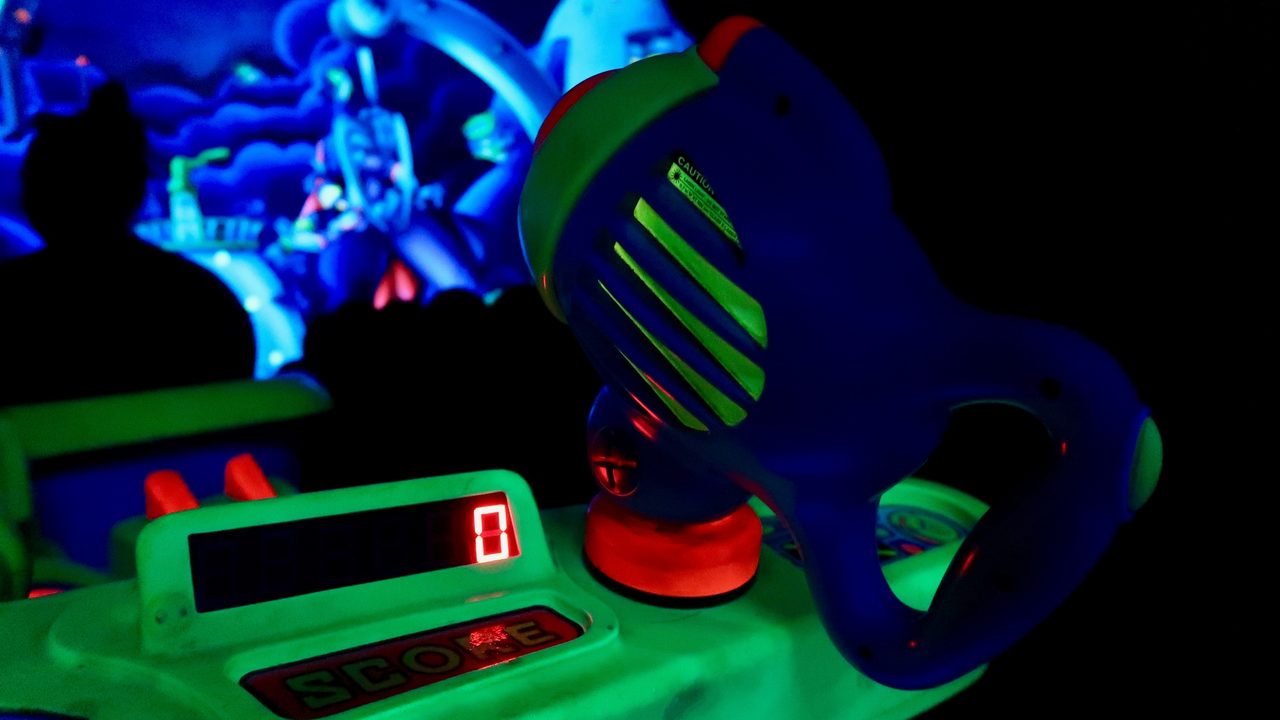 In order to get a perfect score, you will need to be the pilot. Trust us when we say the pilot either makes or breaks the score. Either ride alone or volunteer to steer during your ride.

Next, get a feel for your laser. Once you enter the game, there are going to be tons of lasers going off at the same time. We recommend firing your laser as soon as the ride begins, allowing you to keep your eye on where your laser beam is.

Inside the game, there are “Z” targets all around you, however, you want the big payouts, not the targets worth hundreds. In order to get the most points, you have to look for specific targets. Keep in mind that targets can be hit more than once. This is where keeping an eye on your laser comes in handy.

Let's get to shootin'

The first room you enter will feature a large orange robot on the left. Focus your laser beam on the inside of the left hand. Hitting this target will boost your score 100,000 points per hit. 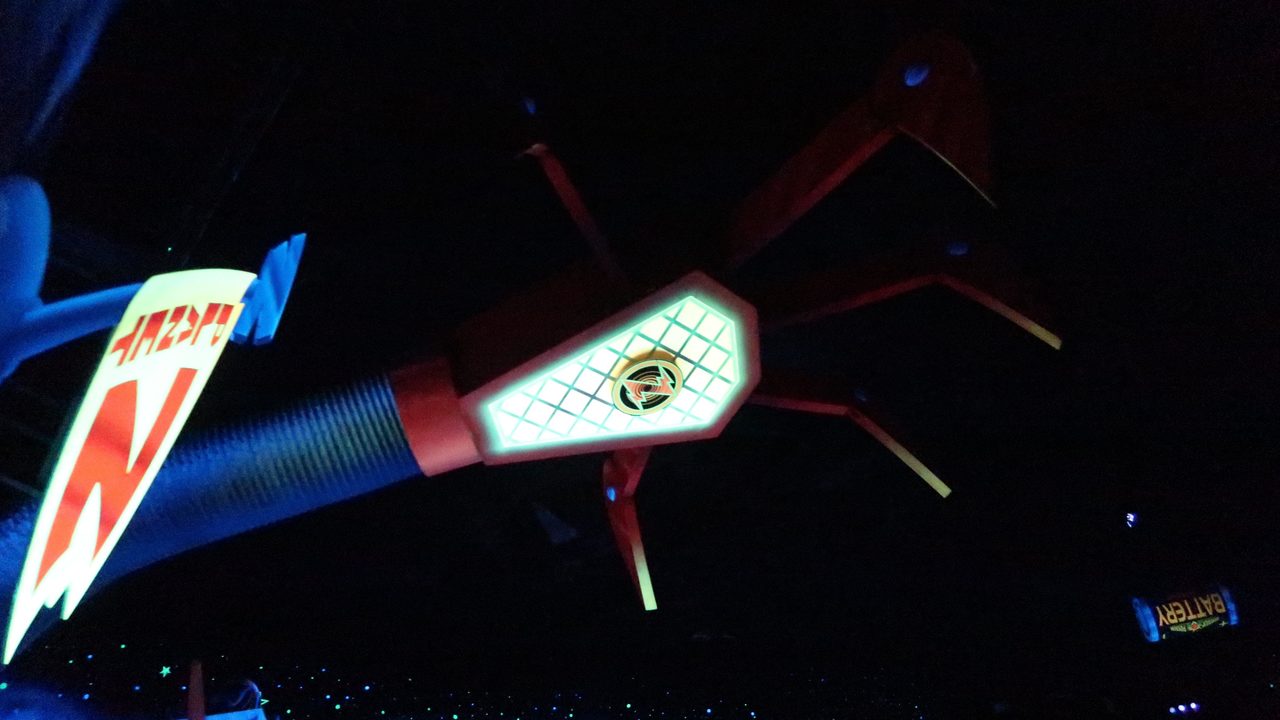 As soon as you have taken as many shots as you can, turn your car around so you are moving backward and aim your laser at the claw located near the ceiling. Because it is near the ceiling, the claw is easier to hit when you are farther away. Hitting both of these targets could give you a bulk of the points needed to become a Galactic Hero. 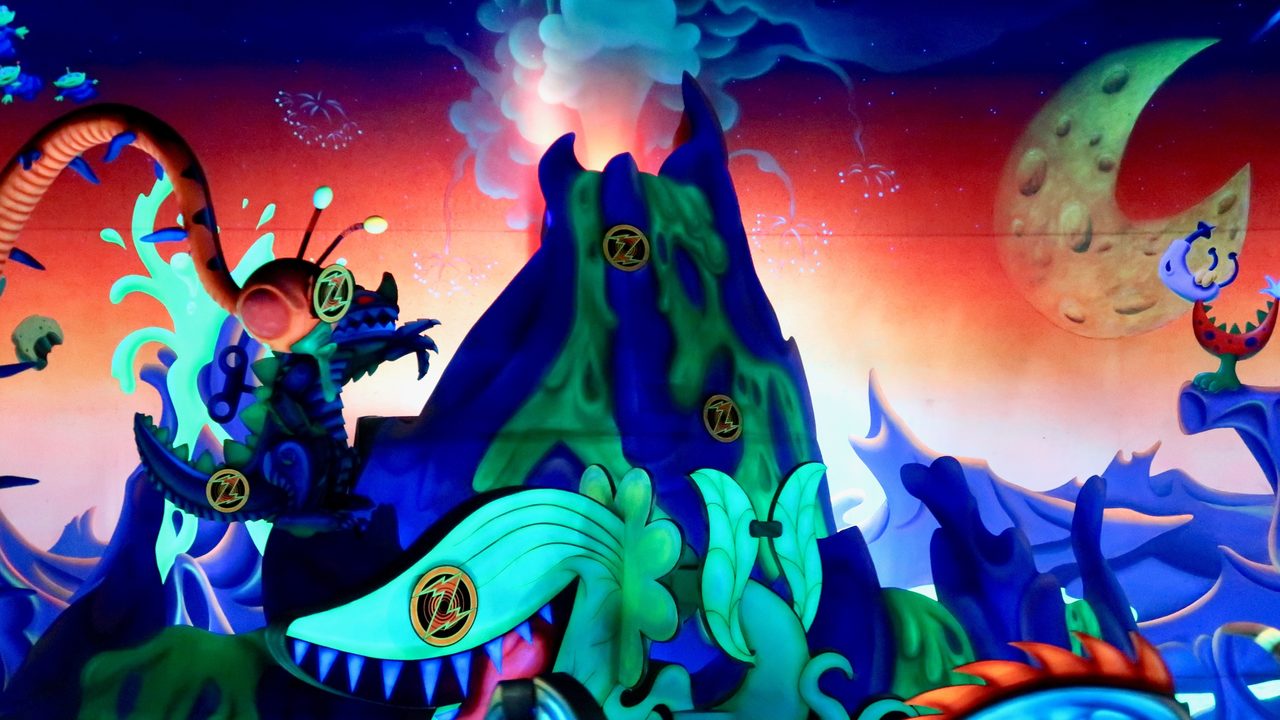 In the second room, you will see a volcano against the back wall. There are two targets on the volcano but you want to aim for the highest “Z.” This target will supply you with 50,000 points per hit. Because it is so far away, it can be very hard to see, so keep an eye on your beam and have a steady hand. You'll know you hit it if lights flash and the volcano erupts. 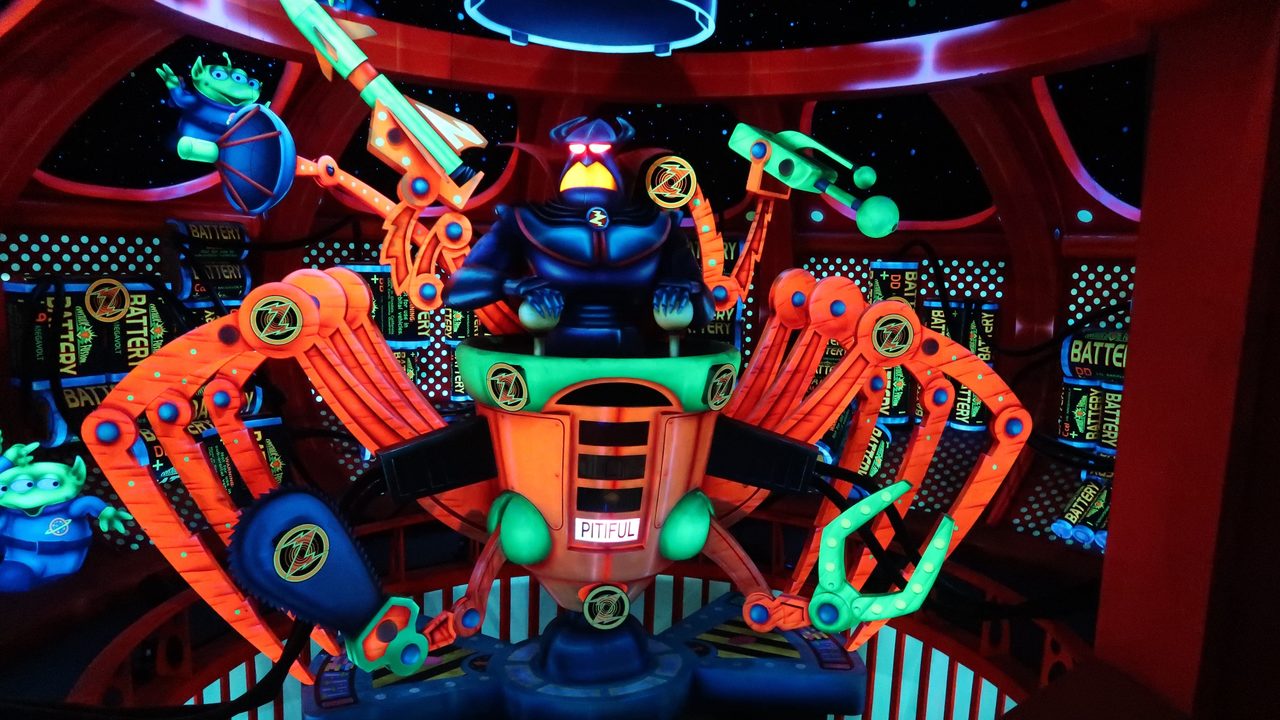 The last high point target is on Zurg’s ship. If you look at the bottom of the ship, you will see a single “Z” target below the word "pitiful." Shoot that target and you will be rewarded with 100,000 per hit.

Insider tip: The target is easiest to hit before and after you pass it. The closer you are to the target, the harder it is to hit. 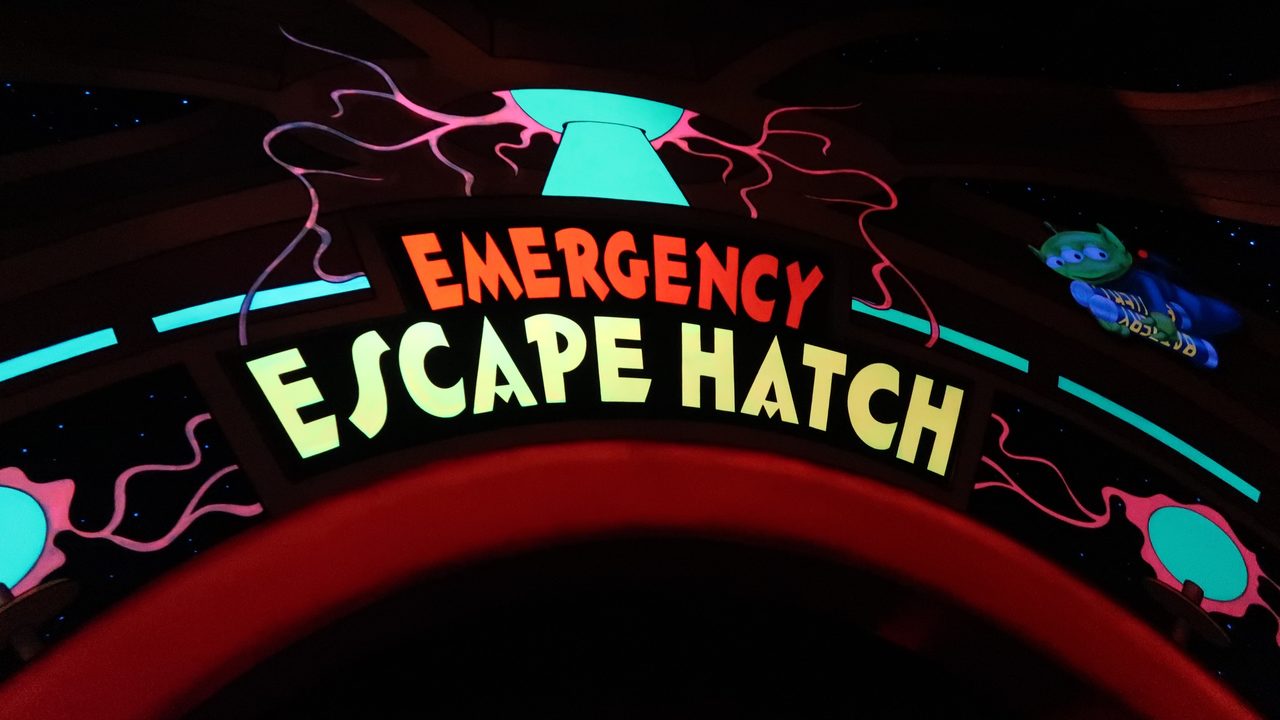 If you haven’t made it to 999,999 yet, there is still time to earn some points. As you enter the Emergency Escape Hatch, you can hold your trigger down and receive 300 to 400 points just for constantly shooting.

After you leave the hatch, your cruiser will no longer spin, however, you can continue to shoot at the targets around Zurg to get as many final points as you can, if you haven’t already maxed out your score. 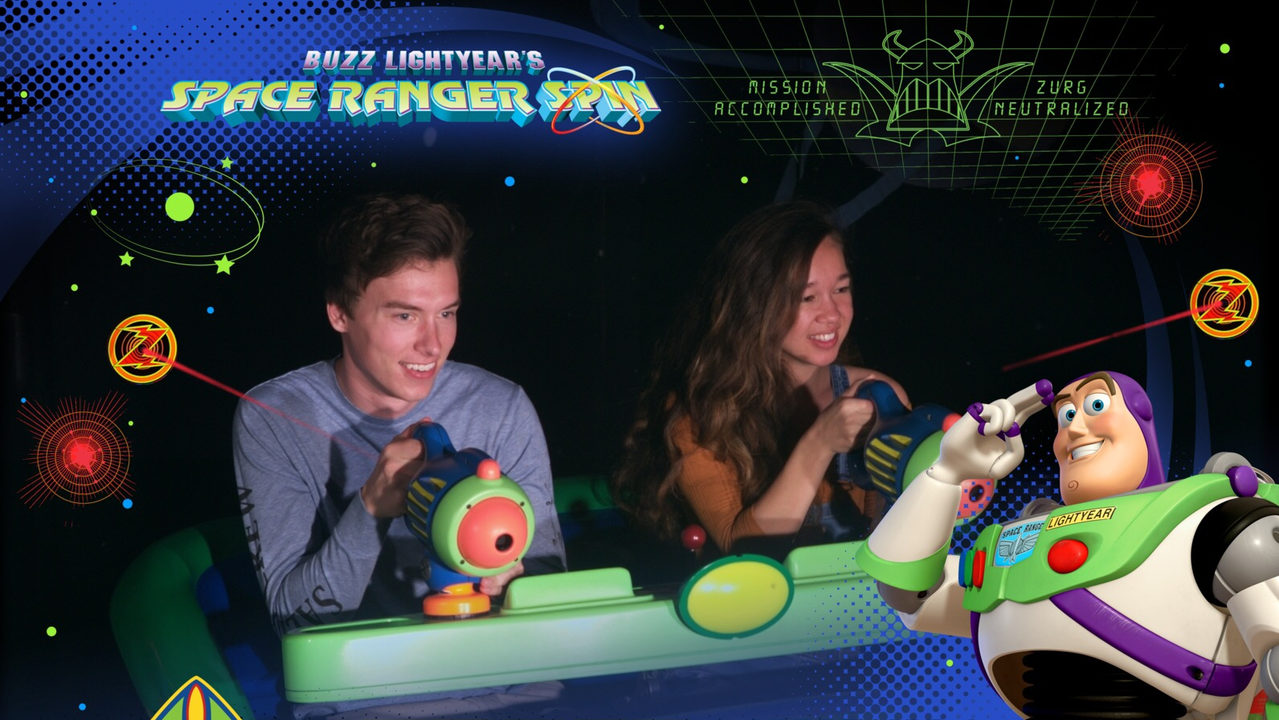 Be sure to smile for the picture as you shoot the last remaining targets. You're going to want to remember the day you saved the galaxy and became a Galactic Hero.

Insider tip: If you have smaller space cadets who are having trouble hitting the targets, tell them to keep shooting no matter what. Even if you never hit a single target, you will be rewarded with 1,300 points for keeping your finger on the trigger during the entire ride, allowing them to rank as a Space Scout on the scoreboard at the end of the ride. 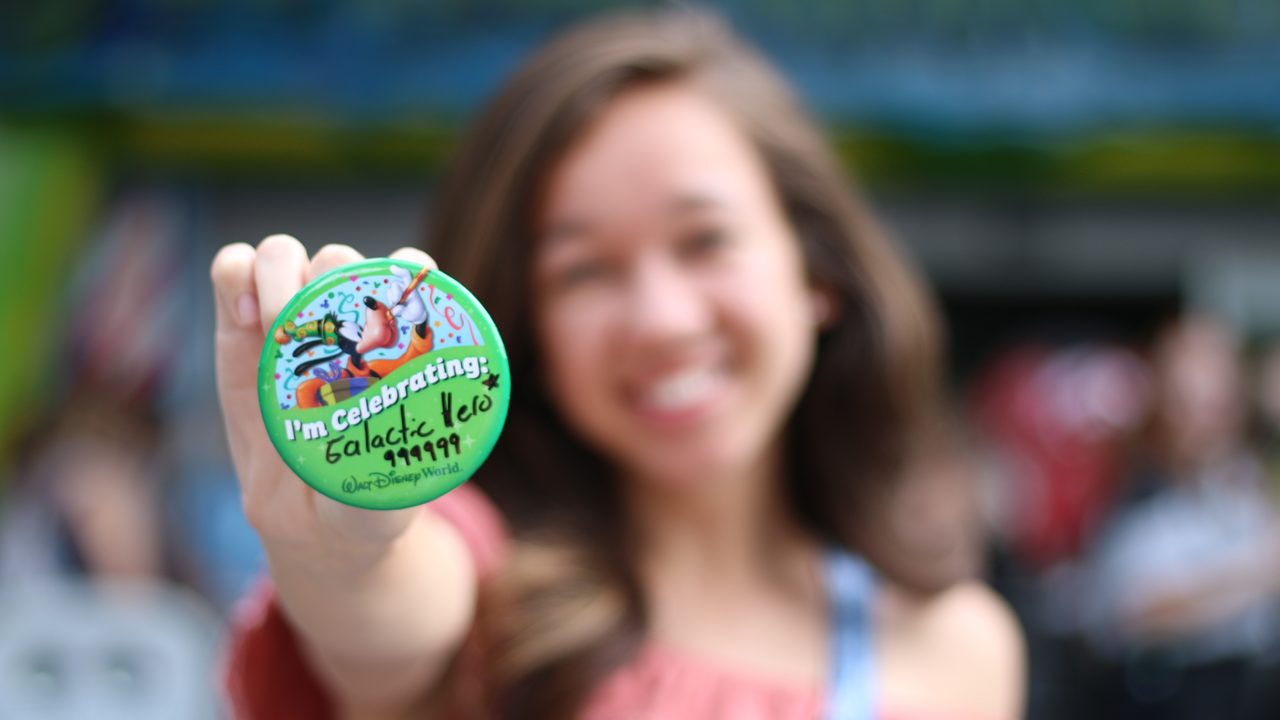 If you max out your score, be sure to take a picture of your achievment and show it to the cast member at the photo area after you exit the ride to receive either a Galactic Hero sticker or a custom pin if they run out of stickers.

If you want something a little more special to commemorate the moment, be sure to check out Oh Yeah Apparel.

Have you become a Galactic Hero? How long did it take you?

Tom Metevia is an Emmy Award-winning content creator. He writes for all of the company's news websites, including ClickOnDetroit.com. Tom specializes in travel, entertainment and theme park news.