Mother Nature’s fireworks hold off until after the 4th

Roanoke can turn to LGBTQ community center for queer literature

Get your website built, hosted, and managed for life with 83% off a UENI subscription

PITTSYLVANIA COUNTY, Va. – Pieces of the Rockford School Road house just north of Gretna in Pittsylvania County were still on fire around noon On Tuesday as firefighters from multiple county departments worked to try to figure out what started the fire.

The house sits next to an auto body shop.

A man, who didn't want to be identified, said he was working behind the shop when the fire started.

"I just heard a 'pop, crack'. I turned around and looked saw the blaze coming out of the window right there on the back side here and the smoke rolling out of the eaves of the house," the man said.

The man said his son, who lives on the same property as the shop, tried to rescue the couple inside the burning house.

His son got to the front door, but the door was locked.

"He said it was just so hot and smokey, he couldn't see anything...so he didn't go in there," the man siad.

While the exact cause was still under investigation Tuesday night, there was a lot of attention being paid Tuesday afternoon to a charred oven brought out of the house.

Pittsylvania County Public Safety Coordinator Chris Slemp said the fire is believed to have started in or around the kitchen.

"We've got several sources of ignition that we need to eliminate," Slemp said.

Aside from the charred oven, he said there are some space heaters investigators are going to be looking at.

Fighting the fire was not easy,

"We had to establish a rural water supply. We had to shuttle water in; tanker-supplied. We had four tankers shuttling water," Slemp explained. "The initial fire, when we got here, was so bad we couldn't even make entry into the house."

The two people found dead inside the house were found just a few feet apart near a bedroom, according to Slemp.

Slemp said he didn't know if they were trying to get out of the house or if the house had working smoke detectors.

"You've got to have active, working smoke detectors in your home. But don't leave things on the stove unattended. Space heaters (are) another (thing people need to think about)," Slemp said.

"We found some space heaters in here we're going to be looking at as well as potential, so make sure you have 3 feet from all combustibles when you're using space heaters and don't use extension cords with space heaters."

The father of the son who tried to rescue the homeowners said firefighters were on scene about 10 minutes after he called 911.

Per county policy, the Pittsylvania County Sheriff's Office is investigating the deaths.

The victims' names had not been released Tuesday night. 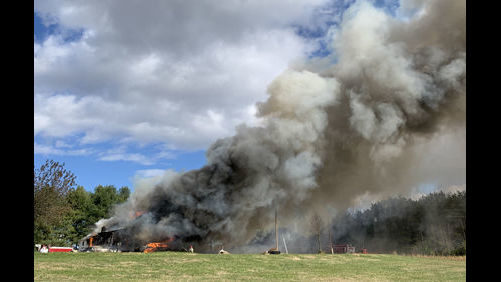