Lovebugs, love birds at the Science Museum of Western Virginia

Consumer Reports: When to weigh yourself, best bathroom scales

It's not often where you can see a film that changes your perspective on a single but often-used phrase, and there's no question that "Thank You for Your Service" is one of them. It's a phrase that people often say to veterans of any war when you meet them, yet, after seeing a true-life film based on the experiences of an Iraq War veteran -- Army Staff Sgt. Adam Schumann -- they take on a different sort of meaning.

It's a film that, given the hardships veterans endure when they return home, makes the phrase "thank you for your service" almost feel like an empty gesture. At least in the context of this film, it feels like ill-equipped system that greets them when they return home is in some ways thankless for their service, and ultimately, thankless for the sacrifices they made while carrying out the duties for their country.

So, what should we be saying to soldiers or veterans when we great them? In a recent phone conversation from Chicago with Schumann and Miles Teller, who plays the soldier in the film, the answer is simple.

"I think, 'Welcome home' is the best thing you can say to anybody," Schumann said.

Teller added that there are other ways to respond to veterans, too; something that he gained insight by working on the film.

"If you want to just say one thing, say 'Welcome home' as Adam said, but people can also be asking, 'What branch are you in?' 'Where did you deploy?' or 'Where did you serve?'" Teller said.

Teller realizes that sometimes asking about military service is a difficult subject to broach with veterans, particularly for those who served in wars prior to Iraq and Afghanistan.

However, having friends that have served in the military and by forging a friendship with Schumann, Teller is glad to see that films like "American Sniper" and "Thank You for Your Service" are finally addressing the devastating effects of posttraumatic stress disorder (PTSD) and a traumatic brain injury (TBI), because it effectively opens the conversation about how to get soldiers the help they need as they integrate back into civilian life after serving in a war.

"The older generation of veterans wanted to deal with things in a masculine way; to be tough and to be thick-skinned and not talk about it," Teller said. "Now, we're just learning as these studies are going out and putting terms on it -- posttraumatic stress and TBI -- and with the amount of suicides (we're finding out that not talking about it) doesn't work. These guys have a lot of open wounds and I think as a nation, yes, we haven't done enough in terms of welcoming soldiers back. So yes, a conversation is better than an empty sentence."

Opening in theaters nationwide on Friday, "Thank You for Your Service," chronicles Schumann's return home from the Iraq War and his inability to reacclimate to civilian life, which has a particularly tough effect on his wife, Saskia (Haley Bennett), and ultimately, their young family. Sadly, Schumann isn't alone in his troubles -- two of his friends and fellow service members (played by Beulah Koale) have also returned and are facing difficult circumstances -- and much of it is rooted in a specific tragic event that occurred when the three were serving in the war. Compounding the problem is a Veterans Affairs system back home that is under-equipped to meet their mental health needs. 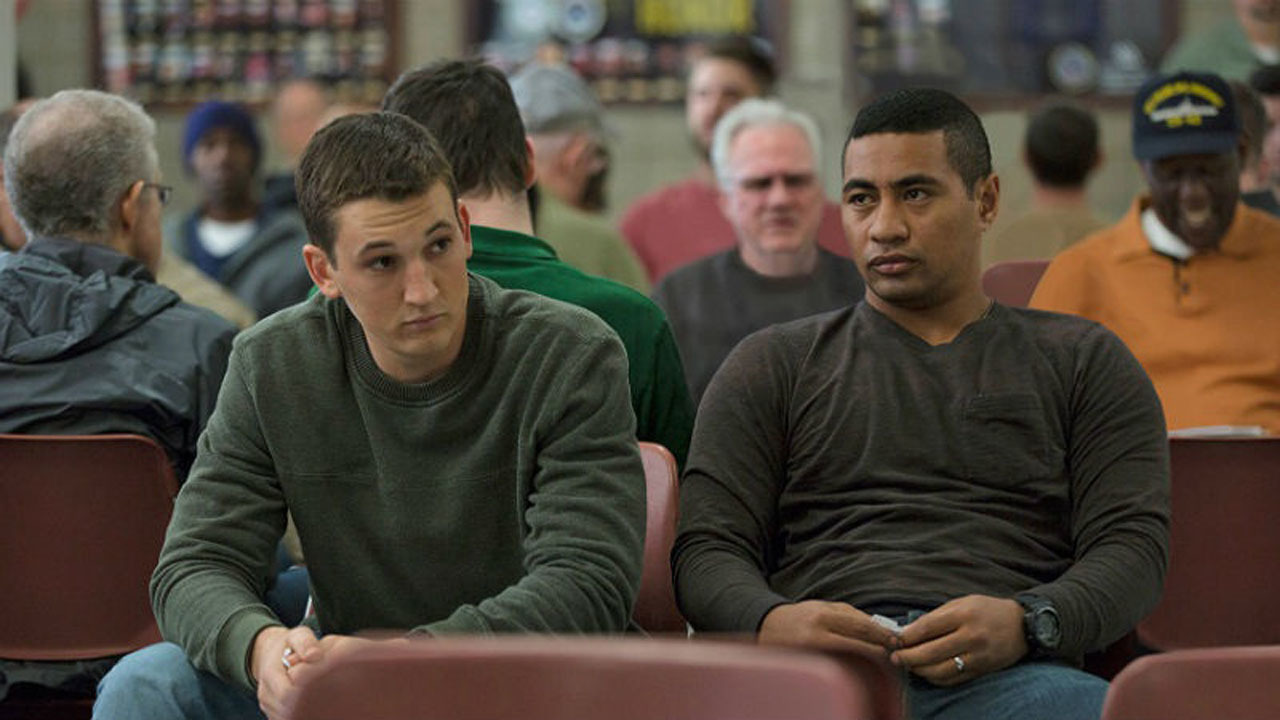 Even though Schumann first confronted his story in the film's source material, the David Finkel book "Thank You for Your Service," the veteran admits that it is still extremely difficult to watch the film. Schumann not only commends Teller's work in the film to bring his harrowing tale to life, but also writer-director Jason Hall. Hall, who also tapped into the nerve of the subject matter with his Oscar-nominated screenplay for "American Sniper," very much did the same with "Thank You for Your Service," Schumann said.

"The movie was extremely gut-wrenching to watch," Schumann said. "I think my mom said it best, which was, 'I feel like I just went through two hours of surgery without anesthesia.' And that's what it felt like. I was crying and laughing, and I think that's a testament to how well Miles acted, and how well Jason relayed what was in the book into the script and direct it in such a way that grabbed our very core. ... It's therapeutic to see the movie, and the more I see it the more I talk about it, the better I get. It's been a positive experience all around."

Teller, who has given his all both physically and mentally in many of his films, said "Thank You for Your Service" required the same sort of commitment; but one that was particularly resonant because he was playing a real-life person he had access to.

"If I'm challenged with something, that mean's the character I'm playing went through a lot of stuff and has taken an emotional toll on them," Teller said. "Playing Adam required all of it, the physical, emotional and the mental aspects."

Ultimately, having starred in such films as the Best Picture Oscar-nominated "Whiplash," the true-life boxing drama "Bleed for This" and most recently, the true-life firefighter drama "Only the Brave," said it's a privilege to act in any film, particularly those that address real-life issues.

"There's a lot of film and TV out there where a lot of situations the characters are in aren't too far removed from your own life. I've been fortunate enough to get to work on some projects that have absolutely incredible stories of characters being put under extraordinary circumstances," Teller said. "I got to put through a boot camp, I got to talk with vets and was welcomed into their homes. I got this incredible experience of what it would be like to do this. For me, to get the kind of training that I've had and to get to try on all these different hats, as it were, for these characters has really been a blessing."

Note: "Thank You for Your Service" studios Universal Pictures and DreamWorks Pictures are offering free tickets to a special screening of the film Thursday night for up to 10,000 active military servicemembers and veterans. Find out more at https://www.thankyouforyourservicemovie.com.